Put this page in your wish list! Create your holiday itinerary, save it for later or share it

Add to the wishlist Ok, got it 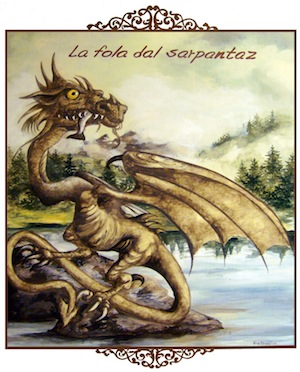 It is said that the Nambino lake was inhabited by a dragon, hidden in the lake bottom. When no people were around, the dragon was used to come out to gnaw the grass around the lake. But one day an unexpected event occurred. In one time the dragon devoured two sheeps, a veal and even a shepherd. The news, as the fear, spread in the whole Val Rendena quickly. Nobody dared to face the dragon, except two hunters coming from Val di Sole that, because of people promised them a great reward, accepted the challenge. The two hunters reached the lake shores and found the dragon on a stone, with the face hidden between its paws. One hunter shot at the dragon and killed it. Between the dragon’s paws, the hunters found a big egg. So people knew that the dragon had probably killed the shepherd and the animals to protect its egg. After some weeks a feast was celebrated in the church of Madonna di Campiglio: the hunters received their reward, and the found egg was hung up on the church wall with the dragon skin, as a thanksgiving to be let free from the dragon.

Subscribe to our newsletter to receive our news from Madonna di Campiglio: events and special dates, holiday ideas, and our top tips on skiing, hiking, bike routes, natural wellness and much more — all this with just a click!

Your request has been sent successfully and we will reply as soon as possible. A copy of the data you have provided us with has been sent to your email address.

We’ve sent you an email. To activate the newsletter, click on the link you will find in the message. Thank you!